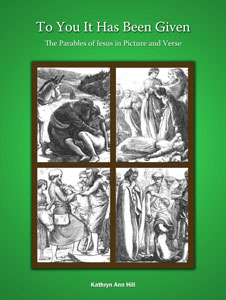 To You It Has Been Given

Available from our online store, or the Concordia Theological Seminary Bookstore at (260) 452-2160

Jesus Christ used stories called parables to teach His hearers about the kingdom of heaven. Broadly speaking, these parables may be interpreted in two different ways. In the first way, the parables are taken as instruction in what we must do to belong to the kingdom of God. In the second way, the parables open our eyes to see what our Lord has done and keeps on doing to make us citizens of His kingdom. This second way predominates in the poems of To You It Has Been Given.

Kathryn Ann Hill's poetry has been published in The Bride of Christ, The Cresset, Gottesdienst, Logia, and Lutheran Forum. Her first book, a set of meditations in verse on the triptychs of Biblia Pauperum, is entitled Rich in Grace: The Bible of the Poor for 21st-Century Christians. It was published by the American Lutheran Publicity Bureau in 2007.